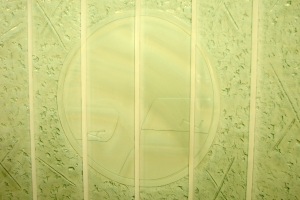 Glass artwork in Australia’s Parliament House: “A” to “Z” in the Hansard Office (which officially records all Parliamentary debates)

4 John,
To the seven churches in the province of Asia:
Grace and peace to you from him who is, and who was, and who is to come, and from the seven spirits before his throne, 5 and from Jesus Christ, who is the faithful witness, the firstborn from the dead, and the ruler of the kings of the earth.
To him who loves us and has freed us from our sins by his blood, 6 and has made us to be a kingdom and priests to serve his God and Father – to him be glory and power for ever and ever! Amen.
7 “Look, he is coming with the clouds,”
and “every eye will see him,
even those who pierced him”;
and all peoples on earth “will mourn because of him.”
So shall it be! Amen.
8 “I am the Alpha and the Omega,” says the Lord God, “who is, and who was, and who is to come, the Almighty.”

The first and last verses of this passage refer to God the Father as him “who is, and who was, and who is to come.”

We are reminded of the occasion when the God of eternity revealed himself to Moses. Moses questioned God (Exodus 3: 13), “Suppose I go to the Israelites and say to them, ‘The God of your fathers has sent me to you,’ and they ask me, ‘What is his name?’ Then what shall I tell them?”

The greeting from John in this book of the Revelation is clearly Trinitarian. Seven, the number representing completion and perfection to Hebrews, appears throughout the book. In the context of “the seven spirits before his throne”, commentators believe John was referencing the completeness and perfection of the Holy Spirit. So John’s greeting of “Grace and peace to you” is from the Father (“the Almighty” – verse 8), the Holy Spirit and Jesus Christ, “the faithful witness”.

The Lord God, in representing himself to John, again used “I am” and then “the Alpha and the Omega”. These are the first and last letters of the Greek alphabet. The English alphabet’s equivalent is “A to Z” which seems to be a shorthand way of saying “from first to last” or “from beginning to end”. Although “the Alpha and the Omega” hardly seems adequate if we are trying to present a full description of God, perhaps it would help to look at the use of “A to Z” today. Book titles alone yield hundreds of topics covered by the “A to Z” formula, from pets to sport and from cooking to home maintenance. The breadth of “knowledge” can be illustrated in part by Trevor Montague’s book, “A to Z of Almost Everything” which runs to 1360 pages!

Throughout the Revelation to John are glimpses of the glory of Jesus Christ. In this short passage John recognised him as “the ruler of the kings of the earth” and attributed to him “glory and power for ever and ever!” Wonderfully, he “loves us and has freed us from our sins by his blood”. He has made us “to be a kingdom and priests to serve his God and Father”. Let us resolve to do so with unrestrained joy.